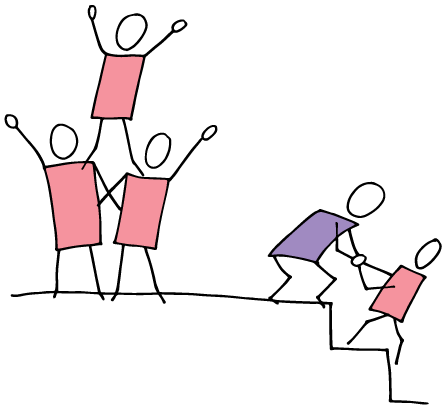 How can an Agile Leader facilitate his teams to maturity?
In a series of 5 blog posts I am going to share some experiences.
In this blog I will introduce a maturity pattern that describes the evolution of a Scrum team.
This pattern is based on personal experiences and insights from Spiral Dynamics.
You can use this pattern as a benchmark for Leading Scrum teams towards more maturity.
As a followup I will present 4 blogs that each describe the transition between the described maturity levels.

If Scrum is done well…

If Scrum is done well, a Scrum team self-organizes, creates value on a regular basis and is highly efficient:

If Scrum is done well, a lot of traditional responsibilities will move to the Scrum team.
For those new to Scrum it is often hard to believe that this transfer will ever take place. And to be honest, I don’t blame them!

Most organisations were not built on principles of self-organisation. They thrived in a time where management owned the plans and development teams owned only the execution.
But times are changing……The world has become so complex that responsibility needs to be owned by those doing the work. Only then can they be fast, flexible and creative.
And they can’t do that without the help of a Leader who shows them the way.

If Scrum is done well, you will need good Agile Leadership!

Many people understand Scrum nowadays, but fail in getting the best out of it.
This is often a result of:

The idea of a self-organising team is fairly new the world of IT, but has proven most successful in sports and military situations. In the military there is a famous saying that states “There are no bad teams, only bad Leaders”.
And there is hope for IT organisations as well!
The best compliment a manager once made to one of my Scrum teams: “I don’t have to worry about you anymore. I just worry about the environment around it, so you can do what you have to.”
What if you could learn from what these teams did to accomplish this? What is the growth pattern that leads to such maturity?
And how can you as an Agile Leader use it to guide your teams to success?

The key to leading successful Scrum teams is to focus on growing the maturity of the Scrum roles by providing them with an environment where they can flourish.
Many leaders focus on the processes and rules in Scrum, while it is the people and the roles that make the difference.

A team can only be as great as the people working in it!

I never met a mature Scrum Team that claimed its success to its ability to follow rules. The credits always go to the greatness of the people, the maturity of the roles and the values they share.
The most successful teams share a pattern, based on 4 important roles: the Scrum Master, Product Owner, Development Team member and Leader.
Although the Agile Leader is not an official role in Scrum, he plays a crucial part in the teams’ success in the organisation. 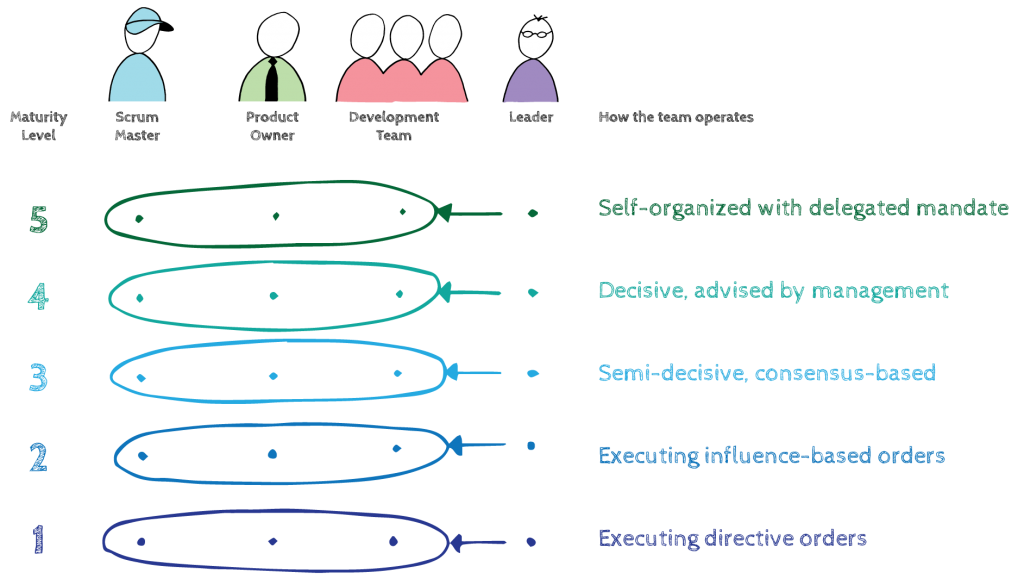 The Leader is responsible to set the boundary conditions for a Scrum team to increase their maturity.
I created a poster with detailed characteristics of each role on each level. You can download the poster here!

About the Maturity Pattern

The pattern is evolutionary

In my Scrum trainings I teach how Scrum is done well: on level 5 of the Maturity Pattern.
Most people have a hard time figuring out how to do that because they just arrived at level 1 or 2. I have never seen anyone jump to the highest level after finishing a training. You will have to walk the path trough all the levels. It requires hard work, perseverance and good Leadership to achieve level 5!
As an Agile Leader it is your responsibility to guide the Scrum roles from one level to the other.

Many Scrum teams get stuck at the first 3 levels of the Maturity Pattern. All teams I observed at level 4 and 5 had one thing in common: their Leader supported and guided them there. Leaders need to create an environment where people can work with commitment and focus without fear of making mistakes.
If a Leader is not able to guide his team to the next level, there will be friction, wrong expectations and dysfunctional Scrum.
As an Agile Leader it is your responsibility to set an example and lead the way.

The success of an entire team is determined by its least mature role. A Scrum team will only show the expected results on each level when all the roles are at least on the same level of maturity.
As an Agile Leader it is your responsibility to facilitate the growth of each role in a team in order to make the whole team grow.

How to use the pattern?

The pattern gives insights in how the Scrum roles become mature.

Warning: The pattern should be used as guidance to help people determine their personal growth path. Do not use it as an incentive, since it will prevent people from actually walking the path!

So how can you use the pattern as guidance?
I will answer this on a more detailed level and give insights on how to move from one level to the other in the upcoming episodes of this blog:

If you want to experience what it takes to be an Agile Leader, you can sign up for my Scrum.org PAL-E training. 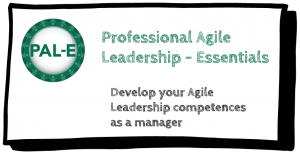 Nice article! I like the maturity levels and their definitions as well

Well done Ron!
When can we start reading the next chapter of this fantastic article? I´m looking forward for it.

Thanks for the compliment…appreciated!
That is a very good question. And I’m going to answer it with: soon.
In the meantime I will give you another blog post that I’m really enthousiastic about….stay tuned!

Any news on how to move from one level to the other?? Still looking forward to the follow up on this great article

Hi Nicolas, thanks for checking and triggering me. This is a good reminder on the value of my blogs.
To be very transparant…I’ve been focusing on the leadership training content in the last year (where we elaborate on these steps to maturity). This training has now reached a stable status, so I will be using the content to write the blogs I promised…..stay tuned!

Hi Ron Eringa,
Well, I’m reading the article and its fantastic. And I would like to know if you have date to finish the five article? Sorry but I’m very anxious

You’re not the first one….at least you’re confirming that we have spent the last 1,5 working on something that creates value.
Instead of releasing the series of blogs we are about to release learning journeys for each role that will help you improve to the next level.

Great poster Ron ! I will use it for a maturity retrospective with my teams. Thanks for sharing.

You’re welcome Vivien….Hopefully that will trigger some good discussions to grow your team!

Simplicity in words which defines essence and requirements for the maturity. Wonderful post ! . Thank You for sharing

Well said! Good article summarising the essence of changing and maturaty levels of Agile leadership. Thank you for sharing and the nice poster as an inspiration for a maturaty model.

Thanks Rutger and you’re welcome. I hope this invites people to have an open discussion to help each other grow!

this is amazing work, thank you very much. Do you have any plans on adding the “leading from level x to level y” points at the bottom, still?

Thank you very much!

Thanks for the compliment….much appreciated.
And yes, I still do have these plans. Actually the answers got so complicated that I decided to continue that story not only in a blog, but in a series of online trainings…..the plan is to have all of this live somewhere before the end of the year….stay tuned and watch my new website AgileLeadershipSchool.com (that is currently under construction)!

Nice. I was just introduced to your blog and I love it! You have a very clear and simple way to present information. That makes it much easier to present this information to others. I cannot wait to read the rest of this series!

Thanks Kelly!
I’m working on followup content as we speak, although it will probably not be in a blog post….

How do you assess the maturity level? By yourself? Or by asking all members of the team?

It’s normally a combination of observations, interactive team sessions and 360 degree feedback. What is most important that the team members are involved so they can learn from the insights gained.

Great article. Going to use it to asses my teams level and which of Galbraiths star model aspects are holding us back from developing

Galbraith’s model definitely has some overlap with the models we have used.
If you want to know more about this, join my Professional Agile Leadership – Essentials (PAL-E) class and learn more about how to lead teams to more Agile maturity!

Have these articles been completed? If so, where can I find them?

Also see some of my comments above…the answers appeared to be less obvious, but nevertheless interesting.
That is why we are completely focused on providing those answers…not in a series of blogs, but in complete learning journeys with lots of interesting stuff to learn.

Hi Ron,
Great article.
Some of us are still waiting for the rest of articles 🙂

Good point indeed!
See some of my comments above…the answers appeared to be less obvious, but nevertheless interesting.
That is why we are completely focused on providing those answers…not in a series of blogs, but in complete learning journeys with lots of interesting stuff to learn.

Hello Ron!
Any updates about moving from one level to other?

Yes, there are…
While I was working on the the answers, I found that the answers were a little more complicated than I could give in a series of blogs. That is why I have developed Learning Journeys for the most important leadership roles in the model: the Scrum Master, Product Owner and the Leader.
Each of those learning journeys contains a number of steps you can take that facilitate the growth of an Agile team. The goal of the new company we are starting is fully devoted to help people walk these journeys.
I will be announcing the start of this company in the beginning of next year, so hopefully I can clear some of the fog then….